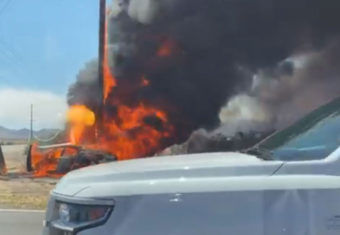 After a full day of work in summer temperatures reaching above 110 degrees, MEC crews responded to a vehicle contacting a pole incident. The call came from emergency dispatchers just after 2:30 p.m.; the vehicle erupted in fire, catching a utility pole and nearby brush on fire at the NW corner of Hwy 95 and Boundary Cone Road. For the safety of the responding fire crews MEC performed switching to isolate the section of line in the incident area. Shortly after 4:00 p.m., a brief outage affected approximately 450 members, of those 86 members remained without power until the pole could be replaced. Power was restored to the 86 members at around 10:00 p.m.

MEC crews responded to a couple more outages into the evening.

Birds caused an outage to approximately 40 members off of Marina Blvd around 5:00 p.m. Crews were able to restore power to these members shortly before 6 p.m.

MEC members on Camino Cove lost power due to equipment failure around 5:00 p.m., crews restored power in the affected area at 9:14 p.m. after replacing the transformer. Outage restoration is very important to Mohave Electric Cooperative and every effort is made to restore power as quickly and safely as possible.