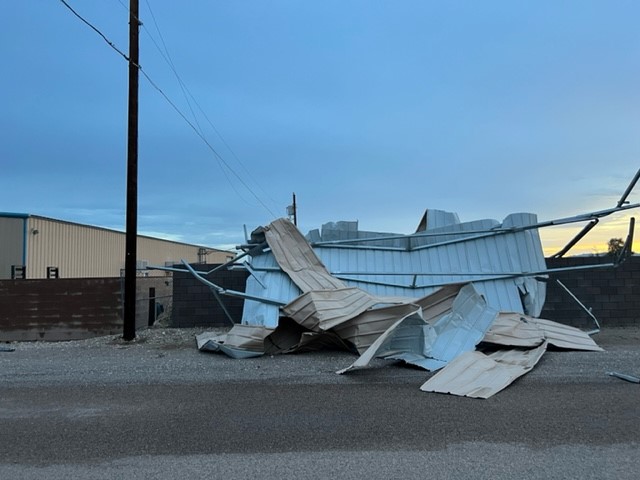 Bullhead City, AZ – A series of storms - as well as a motor vehicle accident - continued throughout the weekend and into Monday morning, sending Mohave Electric Cooperative crews to restore power for MEC members affected by 13 separate outages along the entire MEC service area.

On July 30, at 9:04 pm, a vehicle drove into an MEC cabinet causing 141 members to lose power. Crews responded, replaced the cabinet and restored power by 5:50 am.

“Our crews respond to outages no matter the cause, but a preventable outage, such as a vehicle incident, is an outage sometimes impacting hundreds of members that was avoidable,” said Jerry Hardy, MEC Manager of Engineering and Operations.

On July 31, extreme storms caused blown fuses and power loss in the Big Bend area near Colorado Blvd. There were two separate outages, but they both started at 4:49 pm. The first one to be repaired was for 58 members and ended at 7:16 p.m., and the second affected 289 members and was back up by 8:24 p.m.
Specialized equipment alerted MEC of a burned lightning arrestor in the Silver Creek area. Crews cut power to replace it at 6:25 p.m., made the repairs and reenergized the lines for 26 members at 10:21 p.m.

10 members on Cheyenne Dr and Canal Dr lost power at 5:30 p.m. July 31 when the storm caused a fuse to blow. Crews responded, cleared the line, replaced the fuse, and restored power at 7:58 p.m.

The storm blew part of an awning into a service line tripping the transformer at 5:36 p.m. Crews responded, cleared the awning, inspected the line, and reset the transformer restoring power to seven members.

“It is very important that residents secure their homes, landscaping and yard decorations for the safety of not only the electrical lines, but also other residents and structures,” Hardy said.
Seventy-nine members lost power near Hammer Road when the storm tore a roof off a large storage building tearing down primary lines. Crews made repairs, replaced the primary line, and restored power at 10:46 p.m.

At 5:44, the storm broke seven primary poles on Sterling Road between Calle Del Media and Mountain View Road causing the loss of power for 1,686 members. Crews were able to perform switching to isolate the damaged poles and restored power to 1,218 members at 8:56 p.m., with the remaining 468 members at 9:26 p.m.

In Mohave Valley, the extreme storm caused a blown fuse at 5:11 p.m. causing 14 members on Willow Dr and Poplar Dr to lose power on July 31. Crews responded, patrolled the line, and replaced the fuse restoring power to the MEC members at 7:42 p.m.

The storm is also to blame for 1,750 members in the Topock/Golden Shores area to lose power early Monday, August 1. At 4:59 a.m., a cross arm of a power pole snapped losing one phase. Crews made the necessary repairs and power was expected to be restored early Monday evening.

The eastern portion of MEC’s service area continued to get battered by the storm over the weekend.

A pair of separate incidents caused 602 members in the DW Ranch Rd and Lazy Y U area to lose power twice. At 11:37 a.m. on July 30, the extreme storm caused a primary phase to come loose and cause an outage. Crews responded, cleared the lines, reattached the phase, and had power back up at 1:52 p.m. The next day, July 31, another storm caused a different phase to come loose at 6:11 p.m. for the same customers. Crews made repairs and restored power at 7:58 p.m.

At 5:01 p.m., a breaker in the substation near Wikieup opened causing an outage to 274 members. MEC partner AEPCO worked to repair the breaker and power was restored at 6:25 p.m.
Crews have worked around the clock to restore power for members since the storms began hitting Thursday.

“These amazing utility superheroes do their jobs without question, or hesitation, in the same environments of wind, rain, and lightning that cause the outages and at all hours of the night,” said Tyler Carlson, CEO Mohave Electric Cooperative. “Thank you just does not seem enough to our Linemen, Call Center, and Operations teams.”

Outage restoration is very important to Mohave Electric Cooperative and every effort is made to restore power as quickly and safely as possible. Please remember, there are many ways to report an outage. You can call our toll-free line at (844) 632-2667, text “outage” to 55050 from a number linked to your MEC account or use our SmartHub application on your mobile device to report the outage. With proper notification setup though SmartHub, updates will come to you.

Founded in 1946, Mohave Electric Cooperative is a not-for-profit utility providing reliable, cost-effective power to 36,700 members, 43,500 meters, with more than 1,555 miles of line spanning areas from Bullhead City to Topock on the west, Hualapai to Burro Creek to the south, and Nelson to the east. Mohave Electric Cooperative is an equal opportunity provider and employer.