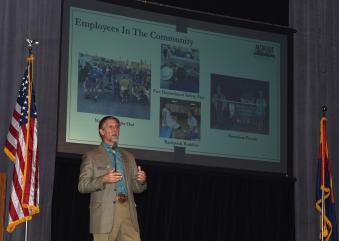 Mohave Electric Cooperative’s annual meeting featured a great deal of praise for both its members and staff as MEC CEO Tyler Carlson presented both past success stories and current issues members should heed.

Carlson discussed the cost increase in wholesale purchased power in 2018 that resulted in the lowering of the Purchased Power Adjustor credit. It was the perfect storm of events as two generators at a major provider’s plant were offline at the same time as the power emergency in California increased the cost of purchasing power.

Carlson stressed the PPA remains a credit and the overall mood was positive because the generator has been repaired and is available this summer.

“We’re working hard and we’ll look up in about a year to see if we can adjust it again to your benefit,” Carlson said to over 180 members in attendance on Friday at River Valley High School in Mohave Valley,

He also spoke about the ability to respond quickly, even if infrastructure damage involves a transmission provider’s system, which was the case during a major outage in 2018 following a microburst. 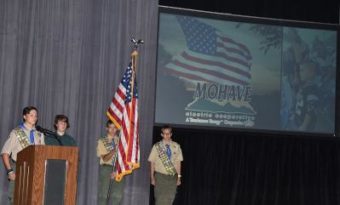 The success of the Vote No on Proposition 127 was a highlighted success story.

“Your partnership in identifying and defeating these kinds of fiscally irresponsible ballot measures is key to keeping rates low,” Carlson said. “Our members rose up to defeat a financially devastating constitutional amendment.”

Carlson discussed several policies members should watch, including the electric vehicle debate. The Arizona Corporation Commission has issued a Policy Statement in support of the electrification of the transportation sector. If passed, it would place responsibility for installation of recharging stations on utilities.

“We’re going to be asking you to reach out to the corporation commission,” Carlson said. “In the rural areas, we don’t have the proliferation of electrical vehicles like they do in the urban areas and if we must put in these charging stations, everyone is paying for the additional infrastructure for just those that have these vehicles.”

The presentation included information about Capital Credits and the programs supported with assigned capital credits, MEC’s controllable costs rank among cooperative statewide and nationally, the staff’s commitment to community, Co-op Connections, and programs such as Weatherization, and the River Fund.

OleNumber1_0.jpgNear the end of the presentation, Carlson went off script to address member curiosity regarding the high-speed broadband survey conducted by MEC in the spring. Of those who took the survey, 95 percent replied they would want the service. 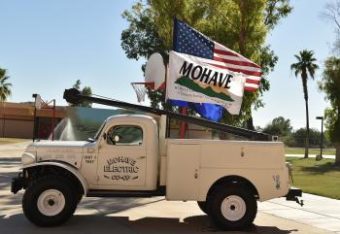 “We’re currently doing a cost-benefit analysis and looking at what it will actually take to build the infrastructure and can we do it at a cost that is equal to or less than, and with a better customer service level, than your current provider,” Carlson said. “That’s what we’re doing right now.”

Following the presentation, MEC staff held a drawing for a variety of prize giveaways, such as power credits, gift cards, and tower fans to name a few.

In addition, members were treated to a meal, gift bag, and entered into a drawing for donated prizes.

MEC also hosted three district meetings throughout the week. Recommended incumbents Cynthia Christy, District 1, Jose Solar, District 2, and Joe Anderson, District 3 can be seated at the July organizational meeting of the board of directors.