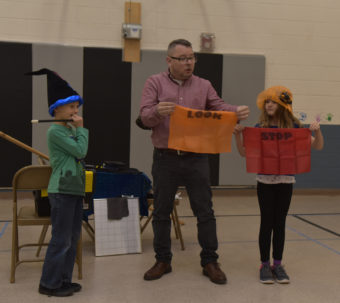 The 40-minute show isn’t an ordinary lesson. Scott Davis uses magic to draw his audience into his message. Learning is always more fun when a magician is teaching. After several alluring tricks, Davis uses a whiteboard and black marker to draw a face resembling an electric outlet, then names the character “Sparky.” The kids are fascinated and as they gaze at Sparky’s face, it comes alive. Its eyes suddenly move and its mouth talks. The children explode with cheers and laughter.

Mohave Electric’s commitment to community extends to local fourth grade students at all elementary schools in the Mohave Electric Cooperative (MEC) service area every year as Davis, an entertainer and magician, captivates his young audiences while educating them on the importance of electrical safety. He educates children by demonstrating that electricity is a tool just like a hammer or saw. When respected and used correctly, it is safe. In contrast, when used improperly, abused, or ignored, it can be dangerous.

He explains how to be aware of electrical hazards as well as how to behave around them. By the end of the show, the students are much wiser about the importance of electrical safety, but they will not soon forget the message because of the magical way it was presented.

While no rabbits were being pulled from a hat, three pieces of material with a message did: Stop. Look. Think.

Before participating in activities such as climbing a tree or flying a kite, youths should take the time to stop, look up and around, and think about whether the chosen activity is safe or if the wiser choice might be to find another location if power lines were above.

The program, known as Making Accidents Disappear, is designed to help students understand both the benefits and potential dangers of electricity.

Davis explains, “Nothing should ever be placed in an electrical socket, including keys, coins, sticks. Only plugs, with your parents’ permission.”

Davis used his magical disappearing outlet to drive home the point. When it became lost, Davis searched the area as students yelled: “it’s behind you.” And sure enough, there it appeared stuck to a back pocket.

It might not have been Houdini, but the message was delivered in a way students will remember.

“I’m excited Mohave Electric sponsors this program. Teaching electrical safety in a way that is memorable and fun for students is a real passion of mine,” Davis said. “There is no performing art more universally loved among children than magic. Electricity has become such an everyday part of our lives, it’s easy to overlook, especially for younger ages.”

The event, funded by assigned capital credits, is part of MEC’s commitment to safety and education.

Scott’s Safety Tips for Your Children: